D e v e l o p m e n t , O p t i m i z e l y ( E p i s e r v e r )
Mattias Olsson 23.06.2015 01.35.45
Sometimes you may want to translate the EPiServer user interface to a currently unsupported language or just want to change the text of some button or whatever. If you have been working with EPiServer for a while you probably know that one way you can do this is by putting XML files in the ~/lang folder. But where the hell are the language files being used by EPiServer so you can lookup all the XPaths? I'll tell you. And because I'm so friendly I'll let you download the XML files for free.

In earlier versions of EPiServer you could find the physical XML language files in the lang folder in your project. This changed with EPiServer 7. Now they are embedded as resources in a couple of assemblies and you have to browse them in a decompiler. I use Telerik JustDecompile and if I'm browsing an assembly there is a Resources-folder containing all the embedded resources.

The assemblies you are interested in is probably these guys:

This is what it looks like when browsing in Telerik JustDecompile: 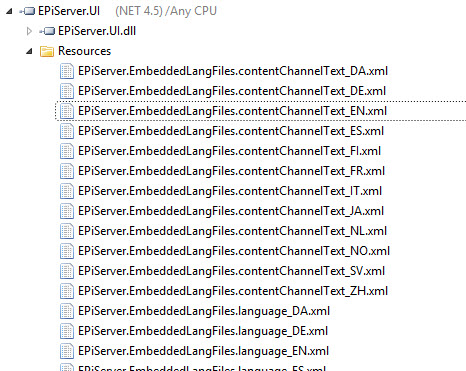 This is some of the content in EPiServer.EmbeddedLangFiles.language_EN.xml, viewed in Telerik JustDecompile: How do I translate/change something?

Let's say I want to change the text on the Publish Changes button for english: 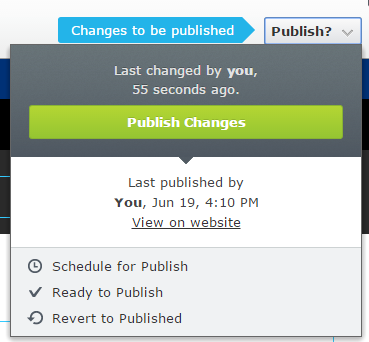 I want the new text to be just "Publish" for some weird reason. What I would do is search for the text "Publish Changes" in the EPiServer.Cms.Shell.EmbeddedLangFiles.OnlineCenter_EN.xml file with XML Explorer so I can lookup the XPath used by EPiServer. To search for a node with a specific text I use this XPath expression:  //*[text() = "Publish Changes"]. So, how do I change this? It's easy now that I know the XPath. I just create a folder in the root of my web project called "lang" and create a file called OnlineCenterOverrides_EN.xml (or whatever you want to call it) in that folder with this content:

You may have to touch web.config or recycle the application pool for the changes to be registered.

After a reload I have achieved my goal: 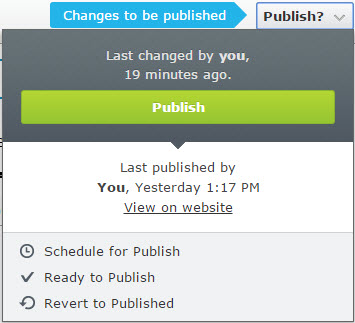 I have extracted the commonly used language files in english and put them in a zip-file that you can download and lookup the XPaths you need.