If you haven’t upgraded yet, I recommend you start by reading the following:

Where did the config go?

If you compare Episerver.config and EpiserverFramework.config files from CMS 6 or 7 with 7.5, you will notice that that siteSettings and almost all virtual path providers has been removed.

To support cloud and FTP deployment all references to Program Files have been removed. EPiServer program files are now part of the Modules VPP folder. This also means there is no longer a requirement to run msi install*.

EPiServer CMS 7.5 config files no longer have absolute paths or server specific settings. If you install the Alloy demo site you may notice the new default catalog structure.

VPP configuration for upload folders are removed from EPiServerFramework.config. EPiServer 7.5 introduces the new Media system (also called Assets) which is based on the same content system used for pages and blocks. This also means that files (media assets) now have support for routing, custom properties, typed models, custom renderings, security and more. More details can be found here:
Migrating VPP-based files to the new media system

Prior to EPiServer 7.5, site configuration where part of episerver.config. This has now been moved to the database – as part of the Admin / Config / Manage Websites menu. In addition to name, URL and start page, you can configure multiple host names for each site. 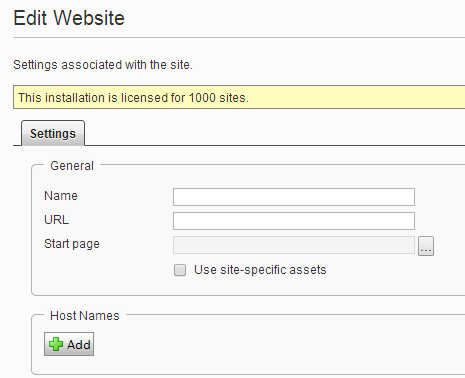 Settings that are common for all sites is part of episerver/applicationSettings, found in episerver.config.

Also worth to notice: If you have several sites running on the same code base, you only need one IIS instance.

This change is also good news for webmasters as it provides possibility to launch new sites, for instance for campaigns, directly from the CMS administrative interface.

Site settings can be accessed using the SiteDefinition class:

As of 7.5 the scheduling logic has been moved inside the web application and both Azure websites and traditional IIS deployment are supported (requirement on Windows Scheduler service is removed). Note that if you are running EPiServer 6 or 7 sites on the same server as 7.5, the EPiServer 7 scheduler service (Legacy) can be downloaded from EPiServer World.

If you are using ImageResizer you need to add some code (a plugin) in order for it to play nice with EPiServer 7.5. Please read the following tech note:
http://world.episerver.com/Code/Martin-Pickering/ImageResizingNet-integration-for-CMS75/

Since the first release, EPiServer has released 4 updates. All updates are cumulative meaning that the latest update always include previous updates. Read more here.